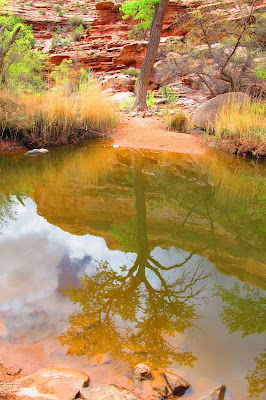 (continued)
Nila stirred slightly, shifting her weight in the backpack as I set off towards Jackson Stairway, another marvel of Chacoan engineering where an ancient road, following some unknown goal, chose to carve a steep stair straight from the side of a cliff, rather than winding round to find a more gentle path down into the Canyon.

Suddenly, there was a sound of a most explosive nature.  A monstrous sized fart rent the air, the sound of which seemed impossible to have come from the 20 pound bundle of sleeping cuteness on my back.

Not wanting to wake her, I struggled to contain my laughter. Until I realized that it twas not just sound, but also substance.  A warm, putrid gel oozed down my back and my eyes grew wide as I remembered placing the wet wipes and diapers on the front seat where I’d be sure to grab them…except I didn’t.  I turned around and sped back to the car, hoping to reach it before she awoke cold, wet and sticky.  We both know I didn’t make it; that I ran back to the car with a toddler screaming in my ear and cold, sticky poo sliding down my back.  You can really get a feel for living primitive cleaning poo off of two people, without running water, while one of those people flails about, flinging it everywhere.

I swabbed us up as best I could, then sang a lullaby til she fell asleep. Stepping outside the camper, I closed my eyes, and turned my face towards the sun. Then the dam broke. Exhausted, I dropped to my knees in the dirt, clutching my arms around me to keep my frustrated fists from pounding the ground. Tears started down my cheeks and my face burned red as I fought to stifle the sound of my sobs. “I can’t do this!  I can’t live tethered to another person no matter how much I love them.” Could I?

The first time I came to Chaco Canyon I was arrested, yet I had never felt more fully bound than I did at that very moment. It wasn’t that I didn’t want to be a mother.  I just wanted to be a Mother And. Because I was still. But we were doing this alone. I didn’t have family eager to care for my child while I went off frolicking and no one else we trusted was volunteering. Try as I might, I just couldn’t figure out how to reconcile the dichotomous pull between dedicating my every atom to the well being of my family and my own ambitions.

I wondered if I should just give up, move on out to the burbs and join the PTA. Many people do. I’ve met dozens of parents who tell me how they used to feed their wild spirits, their big dreams. Sometimes, I see a brief flicker of fire in their eyes as they remember who they were. Then there’s this look of acceptance, sometimes serine and satisfied, but sometimes full of longing, as they tell me that this was all before they had kids.  And when they tell me this, I know they chose to give up, that they will never be wild again. And that’s okay, as long as they’re happy about it.  But I’m pretty sure I can’t be.

I peeked in the camper window at the sweet, sleeping face of my daughter.  There’s something magical about gazing on the face of your sleeping child.  It makes you want to do anything for her. There was no question that she was worth giving up everything for, but I sincerely believed if I could just figure out the right formula, I wouldn’t have to.  Leaning on all fours, I clutched handfuls of sand in my hands and declared, “I can do this.”

The next day, the wind blew cold and hard, but I bundled up and set out for Jackson Stairway under a bright blue sky. The wind blew sand so hard it stung my cheeks so I cinched my hood tightly around my face and kept my nose below a neck gator. The sole hiker on the trail, I was practically strutting, under the comfy encasement of my down coat and mittens, as I reached the edge of the canyon. I looked across to Jackson Stairway, etched like a treacherous ladder down the sheer wall. That’s all I needed. Like Armstrong planting the flag on the moon, I snapped a picture and headed back to camp, the wind at my back.

After that everything changed. Most mommies I know prefer the spa for regeneration, but over the next year and a half I managed to travel down that crazy Chaco road more times than I’d go to Walmart, and for a woman with a babe still in diapers, that really says something.  A place that almost landed me in jail, became where I most felt free.

A year later, I took a solo camping trip down that bumpy road for one of the park’s “star talks” that utilize Chaco’s impressive telescope collection.  Because of its remote location, Chaco Canyon offers some of the best stargazing in North America.  Periodically, Joe Public can view spectacles far out in space normally only viewed by professional astronomers and God.   It was a no-moon night and the stars dazzled while bats flit about the sky like dark butterflies.  We gazed into the center of Lyra, the twins, and other far flung galaxies, barely scratching the surface of what’s out there. I was suddenly struck by how much this place, dedicated to the preservation of the past, could teach us about the present, and even the future. About how much I had learned here for my own life.

Did I gain enough of Lehrer’s psychological distance to reconcile the desires of my heart? I want to tell you unequivocally yes and then explain eloquently in exactly what transformative ways that is true.  But I can’t.  Maybe someday. I can only tell you that the bumpy roads are worth it. That Life is hard, but beautiful, as Skeleton man said that it would be. Pa yuk polo (Hopi for):  this is the end of this story.
Posted by Donna Stewart at 12:20 PM