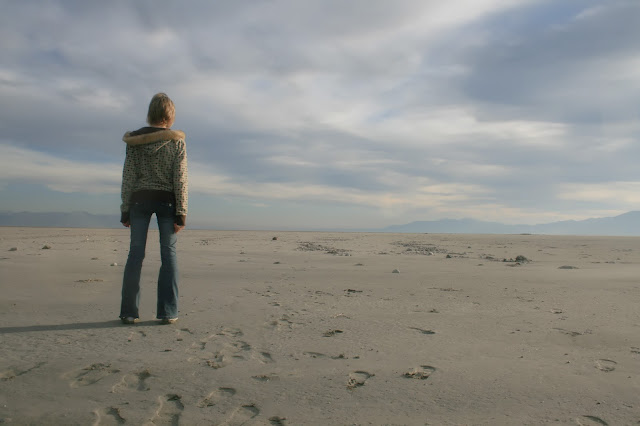 (continued from Part I)
The thrill of trespassing on Federal property, and a UNESCO World Heritage Site-- a site deemed to be of universal value--promised to keep me warm, and we left the truck and set off towards the nearest ruin.  We only made it a quarter mile before we saw the jeep approaching, a cloud of dust at its bumper.  Fearing jail time and fines, we ducked into the sagebrush, making our actions appear far more sinister than they were.  It was stupid.  They had already seen us.  Now we looked like grave robbers.  Over a loudspeaker the ranger demanded we emerge with hands held high.

Sheepishly we rose from the sagebrush with hands obediently aloft and shuffled our feet to the proper authorities.  After we convinced them we weren’t looters, just stupid kids, they escorted us out of the park, practically pulling us by our ears.   We spent another hour on the bumpy road, then three, frosty-silent hours home and that was that.  I never wanted to go back.

So that’s how Chaco and I met.  Not like Romeo and Juliet, but more like Harry and Sally.  Despite all the characteristics that should have had me rollicking through canyons, ruins and books for years, instead I drew an invisible boundary around the place. While I enthusiastically explored practically everywhere else in the Southwest, as if the water was poisoned, I would not go to Chaco Canyon, a mere four hours from my home.  Maybe it was because that whole day had been such a misery. More likely, it was because I’m claustrophobic and this place almost landed me in the pokey.

Fifteen years later, the adolescent waif kicking and scratching to survive had grown up, put herself through college and enjoyed a life devoted to outdoor adventure sports, funded by a rewarding career as a professional research writer.  For a little white girl from the hood of Memphis, Tennessee, I’d broken expectations.  I’d met the man of my dreams and had the good sense to marry him.  I had fascinating work and spent my free time scraping my belly against sandstone, rock climbing sheer walls all over the Southwest, plunging down rocky trails on my mountain bike or backpacking throughout Central America.

In my anamolous life, I had survived homelessness, poverty, drive by shootings, and sailing a Pontiac Trans-am under a parked semi, watching in slow motion as the corner of the semi ripped through the glittering silver hood, shattering the windshield before stopping a foot from my face.   Out West, I survived belly-flopping from a 95 foot cliff dive at Navajo Lake in New Mexico, breaking the fall with my face, nose and ribs.  I broke my jaw and wrists falling while freeclimbing on a crumbly rock wall in Durango, Colorado and wandered lost in the Utah desert until my lips blistered from sun, wind and dehydration.  I fought through red tape razor-wire and the quagmire of self-doubt to put myself through college--then graduated with honors.

Somehow, I managed to make surprisingly good decisions along my way: Accept the invitation to go backstage and party with Metallica?  No, and I’ll thank you to keep your hands to yourself, if you please!  Try the really hard drugs like cocaine or meth?  Hell no.  Travel across the country in a Volkswagen Beetle with a notebook, a tent and $60 to my name?  Hells Yes! Whether surviving my own reckless ignorance or the caprices of fate, I felt like I was really starting to figure this life thing out.   Until....
I became a mother.  I became a mother and I had no idea how to be one, who to ask…or who to listen to amidst the clamor of free advice.  My mother-in-law offers advice by the bushel, but complained that I don’t listen to anyone but myself, to which I replied, “That’s because I have an IQ of 146 and most people don’t.”

I’m usually not that snarky, but in the process of giving birth I dislodged my sacrum (who even knew that could happen??) and I was uncomfortable on the best days and in dramatic pain on the worst. Rock climbing and mountain biking, which had served in lieu of drugs, alcohol, and psychotherapy, were temporarily verboten, so my husband and I found ourselves dealing with the newness of parenthood and recovery from a significant back injury, alone and cut off from traditional coping mechanisms.

Then there was the career derailment.  I’d been driving five hours to Grand Junction to get my master’s in psychology, and needless to say, that between back pain and the lack of sleep or outside help, there was no driving five hours or writing papers, so the master’s program was put on hold.  Without graduate school options in Durango, unless I wanted to do an online degree, this meant indefinitely.  So, sometimes I was grumpy.

I thought of stories I’d read or movies I’d seen where a mother abandons her children and that nose-wrinkling-repulsion at the heartless harpy who could walk away from her own babies.  I’m not proud to say this, but I can see how it could happen, how a woman could feel so terrified and rung dry as she watches the picture of who she thought she was lose its color and dim, to be replaced with someone she doesn’t know and isn’t sure she likes.   Giving up my rock climbing gear and career for baby wipes and breast pumps sometimes felt like a demotion.  Other times it felt like a promotion I wasn’t qualified for.  After 200,000 years of Homo Sapien evolution, I was counting on parenthood being fairly instinctual, but I learned through blistered nipples that even knowing how to breastfeed properly doesn’t emerge completely from genetic code.

It’s not always like that, but if you’re a parent, you knew that.  Or you just decided you’re never having children.  Actually, for most of it we’ve been running on the giddiness of creation and the lunacy of sleep deprivation.   I’ve spent hours gleefully playing “kissy-footy”and peek-a-boo, or lying beside my daughter as she sleeps, listening to the magnificence of her breath.  At first we barely noticed the things in our lives we’d dropped.  But as we grew into our family, sleep deprivation subsided, my neural pathways sputtered back to life.

I had always thought of stay at home Moms as people who just had no outside interests.  Now I understood the dichotomous pull between dedicating every atom of your being to the health and happiness of your family and the slightly more muted voices of your own ambitions.  Those voices, though hard to hear over the roar of motherhood, were vying for recognition and becoming more insistent. Intellectually, I yearned for the stimulation my research work and master’s program provided.  My limbic system yearned for the endorphins of hard exercise and little brushes with death that I never intended, but sure were fun to survive.   My entire being ached for travel, which had often combined both.

In an article by neurologist and author of Why We Decide, Jonah Lehrer, he said that we are a “migratory species” and that travel not only stimulates human evolution, but that there is something “intellectually liberating about distance”:  It ignites a mysterious “cognitive quirk” that allows us to work through challenges more objectively and creatively when we can attain some distance from them, whether this distance is “physical, temporal or even emotional.”  While we don’t fully understand this “quirk” it appears to be innate, a stimulus that has set humanity roving since first we pulled our bellies onto the sand from out of our primordial ooze. Though, some of us need to rove more than others.

I found it comforting to know that we are actually hard-wired to crave the open road and my deep need to ramble is actually a psycho-biological form of grappling with life’s challenges .  My husband is similarly inclined.

After a year and a half of catastrophic attempts to take our new baby tent camping, we finally bought and lovingly restored a 12 foot vintage camper we christened Old Ironsides, after an 18th century naval frigate said to be indestructible and still floating in Boston Harbor. What better name for the ship we hoped would launch us back to the magical world of traveling?

As soon as she was ready, my husband suggested we give Chaco Canyon a try given its close proximity.   Yoga and physical therapy had nearly restored my back and I was eager to try out a new child back carrier.  Though the idea of Chaco was at first repellent, fifteen years and one hell of a roller coaster ride later, I returned to Chaco Canyon for a weekend camping trip.


Other than the tragic loss of the voice of Ricardo Mantolbahn as the park’s radio spokesperson, little seemed to have changed.  The road actually seemed worse.  Below the thin veneer of gravel was clay that turned treacherously to grease after rain, then dried hard, so that our tires were guided and bounced in the grooves of any vehicle whose tires had trod before. We tried to just speed through, until we turned a corner and almost skidded off the road dodging a herd of free-range horses moseying down the middle of the road, long tails sashaying back and forth. They were attended by the smartest dogs I’ve ever seen. One of them, I swear, barked us the riot act as we passed. (Photo).  (Continued).
Posted by Donna Stewart at 12:23 PM