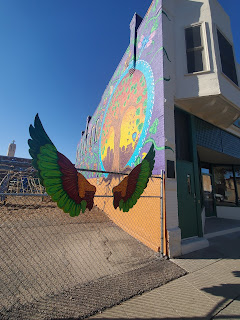 I've started referring affectionately to my seemingly standardized 4:30 am wake-up-and-wrestle-with-anxiety-time as "Fret Hour." It's where my mind throws every possible threat at me as though it's currently scheduled for the day's events. At the tail-end of this morning's bout, I had an epiphany: We're ALL going through hell right now, right? I mean, not all the time and some of the fall out around this is quite lovely, but it's also kind of a horror show. Climate change bringing catastrophe. The big P's of Pandemic and Politics. Economic uncertainty. My favorite restaurant shutting down because of an outbreak. On top of that, throw in some personal crisis....But this is my thought, one that might help peal off the horror mask of all of the above:
This is the kind of shoot-show that brought us "The Last Great Generation." That generation that is currently in their 90s that seemed to be made of a glorious combo of satin and steel. Resilient, resourceful, deeply ethical, conscionable...and kind.
You know part of how they got there? They went through HELL. Two world wars, a smatter of other wars, The Great Depression, The Dust Bowl bringing food insecurity, wide-spread, poverty that sent Americans roving all over the country in search of food and shelter (read Grapes of Wrath if you haven't.)...probably more that I'm not even thinking about. That generation has been idolized, painted as either a generation of Phoenix or winged angels. But what we're forgetting is that it wasn't a generation of people. It was an ERA of people from MANY generations. What we're calling The Last Great Generation are just the last of a particular era's representatives.
Right now, every single one of us is being forged by these experiences. Those generation's became what they were because of their ideals and philosophies, their deepest beliefs around justice and equality. Also just desperately trying to survive, but they managed to hold onto the higher drives as well. It made me feel certain that we're going to survive this. Even if there is WORSE to come, We Are Going To Survive THIS and when we do, we, every single one of us, may very well have our own wings. Just hang in there while we grow them. #survivor #angelwings #COVID19 #love #spiritualawakening
Posted by Donna Stewart at 7:46 AM