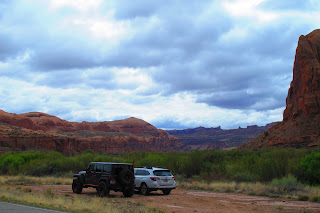 To reach the summit, you had to scramble across, and ever up, a talus field. The field was  a steep slope of craggy boulders and rocks, jumbled and piled precariously to a sharp point. I made the final traverse gingerly testing each rock before I put my weight on it. Towards the top, the vertigo effect had my head swimming so I chose to move on all fours for the largest part.

Here I found a handful of scattered hiking parties taking in the view, drinking water and snacking on Kind bars and packets of trail mix. Again I was struck by how everyone seemed to take no notice of the clouds that were pushing together right over their heads.

Personally, I’ve heard way too many lightning stories to be comfortable being the tallest object when clouds are about. Why was I the only one concerned? There was a family over there with two children around nine or ten years old, but Mom and Dad looked like they should know what they’re doing, whatever that means. There’s some trail running dudes over there, with iron legs, who probably do this every week. Surely they know, right? No one seemed to care and I was even more confused. Is lightening not as big a deal at this elevation as opposed to the 10,000+ ft. peaks I had been climbing around Durango? I made a mental note to look into this next time I was parked in front of “the box.”

I decided to keep my own counsel, and that of my daughter, Nila, who had made me promise not to have my snack until I was back down safe in the car. The air was thick with moisture, something you can really notice if you’ve been living in the desert for 15 years, and I felt at the very least, a downpour was imminent.

Boulders shifted as I crawled across them to snap my summit photos. Later this day, one of those boulders would roll out from under and then on top of Dave Mackey, a world renowned elite ultra-runner. The boulder was said to weigh 400 lbs and took rescue workers hours to get it off of him. His tibia and fibula were shattered, but he’s alive. He was later quoted as saying, “I’ve been so lucky in 20 years of doing this stuff that I’m actually OK with it,” Mackey told a news station.”[1] An incredible man with an incredible story. But that’s not my story.

I got my pics and turned to hurry down to where there was something taller than me besides that guy. As I came down, I passed the gentleman from India who looked surprised to see me heading down so soon and I pointed up and said simply, “Storm.” I wanted to say it to everyone, especially the family with the children. I wanted to shout, “Hey! It’s time to get down, ya idjits!” I passed the family I’d already coached about falling rock and was on the verge of telling them, but stopped myself, still wondering if I was over reacting.

A few rain drops fell on the trail in front of me when I saw a woman coming up the trail. I couldn’t help saying, “Am I the only one concerned about lightning?” The upcoming hiker said, “I don’t think there’s going to be lightning.” To which I said, “Really? Why not?” She stopped hiking, looked up to the sky, and said, “Oh.” Then she shrugged and said, “I don’t think there will be lightning.” I was incredulous. Was the air too thin up here? WTF? Then I shrugged, “Okey Dokey.” and turned to hurry down the trail.

It was maybe five minutes before the clouds unleashed. Rain started coming down, hard. The sky went dark, despite being the middle of the day. Then hail mixed with the rain. I had a hood on my jacket, but I didn’t want it up because I wanted to be able to see all around me. Then BOOM! Lightening streaked across the sky and touched down way too close. It was so close I ransacked those mental boxes trying to remember what to do in the event you were caught on a mountain in a lightning storm. I could only remember a few things: Don’t be the tallest thing. Don’t stand near or under tall trees. If worse comes to worse, squat with your heels up and don’t let anything else touch the ground. But was this old advice or new? Do you stand under rocks? Should you just run? Stand near a giant boulder or get far away from it? And what about the other people up there, the ones who didn’t even think this would happen? Should I go back for them? If I did, what would I do? It didn’t help that we’d just seen The Avengers last night, though my husband pointed out later: I wasn’t an Avenger.

A lightning bolt hit the ground less than fifty feet away. At that point, my limbic system told my rational mind to just shut up and run. So that’s what I did. The rocky stairs I’d just climbed up, quickly filled with water, making one long, slick waterfall flowing down hill. My limbic system shouted, “Out of the trail! Water conducts electricity! If lightning strikes near here again, you’re fried!” Or maybe it just said “Yipes!” But I jumped out of the trail and ran alongside it, jumping rocks and logs, sliding down mudslicked slopes, catching myself, up and running again, driving in my heels to keep some traction, eyes glued to the ground to give my feet warning of holes, rocks, drop offs, slipping on little piles of hail accumulating everywhere. When I had to stop to catch my breath, I did so in the lightning strike squat method, then got spurred on by another bolt of lightning, and sent running again. Talk about Crossfit! I admit it. Part of me was loving this. In a lot of ways, it was just what I needed.

As I tore down the hillside I was counting seconds between thunder claps to determine how close to the eye of the storm. Legs burning. For most of the run, it was only a second or less. Then as suddenly as it broke, the thunder and lightning was moving away. The rain was slowing, and I felt like I could too. It had taken me three hours to hike up, but it only took me 30 minutes to get down to the main trail.

This is where it gets surreal. I came out of the woods and onto the main trail and it was as if I stepped out of this world of chaos into another dimension. A herd of deer grazed peaceably a little further downhill. It was still raining, but now the rain was soft. I heard feet hitting packed earth and a lone runner rounded the bend, smiled and said Hello, as he ran passed. It was Dave Mackey, on his way to the top of Bear Peak.

Then I heard voices behind me and turned to see a couple of spotlessly clean trail runners who were talking about the latest coffee shop to open near Pearl Street as they ran past me, without a second glance, at this terribly muddy woman stumbling out of the trees, still shaking. I saw two other figures come out of the trees in front of me. It was two guys I’d seen on the hike and they looked just as shaken. We fell in together walking back to the cars, talking about our experiences, and how weird it was to come out of the woods back into basically a City Park, everything calm and safe. We exchanged lightning etiquette, none of us sure we had done any of the right things. When I came to the parking lot, I paused just before the trail turned to parking lot, and looked back up at Bear Peak, now swathed in a peaceful gauze of low hanging clouds. Again, I wondered if I should have gone back to see if anyone needed help. I’m still wondering.

Post Script: I checked the news and to my relief, the only casualty was Mr. Mackey, who overturned the boulder on top of his leg. Not that that isn’t tragic, but I was relieved to see no listing of children struck by lightning, or people tumbling down slick cliffs to their death.

I looked up what should be done if one is caught in a mountain lightning storm and all of the sites basically said, just don’t be there. Apparently, if you hear thunder, you’re already in danger of lightning that can strike ten miles from the clouds where they originate. The definite don’ts: don’t stand under or near tall trees. Don’t be the tallest thing in your area, DON’T stand under rocks or boulders. Don’t take shelter under a picnic shelter or any building that isn’t grounded. The safest place to be is a grounded building or a car. Stay out of water. RUN until you find good shelter, unless you might tumble down a cliff. DON’T use the lightning squat method.

This was just a day hike up the hill from a big city, but isn’t it marvelous how easily adventure can find you? “It’s a dangerous business, Frodo, going out your door. You step onto the road and, if you don’t keep your feet, there’s no knowing where you might be swept off to.”


[1] Runner’s world. http://www.runnersworld.com/general-interest/ultrarunner-dave-mackey-recovering-after-serious-fall
Posted by Donna Stewart at 7:47 AM